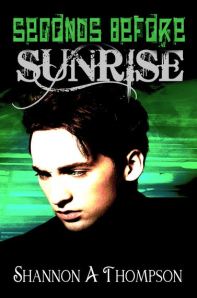 I was given a free copy of Seconds Before Sunrise in exchange for an honest review. Thank you Shannon for the opportunity to preview your novel before it was even released!

Thompson has successfully created a compelling world of paranormal fantasy existing in parallel to our reality in her Timely Death Trilogy. Forces of good and evil have been at war for countless years. The Light seeks to destroy. The Dark forces of good (yes, good) defend the world from the Light’s evil intents. Eric Welborn will be the Dark’s salvation, or destruction. He must lead the Dark forces in an epic battle destined to take place on his eighteenth birthday. If he fails, all will be lost.

In book one, Minutes Before Sunset, we meet the cast of characters and are immersed in the mythology of the Light and the Dark, the world of shades and paranormal powers. Eric and Jessica are seemingly simple teenagers trying to navigate the turbulent waters of adolescence but they are both much more.

Book two, Seconds Before Sunrise, picks up where Minutes Before Sunset leaves off. Jessica’s memory has been wiped to protect her from the Light but the spell is flawed. She’s remembering things, dreaming vividly of another life that she doesn’t understand. Eric trains relentlessly for the coming battle but struggles to stay focused. Frustration and anger lead to recklessness and Eric endangers himself and the entire Dark community. Events escalate quickly and despite their efforts to remain apart for their mutual safety, Eric and Jessica are naturally drawn to one another. When the battle finally comes it won’t be anything like you think.

Seconds Before Sunrise is a young adult, paranormal romance fantasy. To be completely honest, it’s not my favorite genre. I’ve read some that I truly enjoy, like the Blue Bloods series by Melissa de la Cruz, and some that truly turn me off, like the Twilight series. The Timely Death Trilogy falls somewhere in-between for me.

I believe Seconds Before Sunrise will easily appeal to young readers or adults who enjoy YA fiction. It has all the familiar elements: teenage angst, peer pressure, parents who just don’t understand, characters that are lost or searching for something, conflict and drama, and young love. Thompson does an expert job at conveying the frustrations and feelings of adolescence. Her characters are well-rounded and believable. The dialogue reads easily and reminds me of the emotionally charged days of youth. I finished the book in three days and I’m certain it could be devoured in even less. The pace is handled perfectly, the action and flow move forward seamlessly. The climax is satisfying and yet not completely whole, leaving readers primed and anxious for the next installment.

While I don’t love everything about the story or the series, I do respect and appreciate it as a solid piece of work that will appeal to many readers. My personal reasons for not identifying with certain elements are simply that, personal preferences. I don’t like to spoil the experience of reading a book and drawing your own conclusions so I won’t delve any deeper into specifics. Overall, I would recommend Seconds Before Sunrise to young readers and readers interested in teen lit, romance, urban fantasy, and paranormal fantasy. I would also highly recommend that you read book one, Minutes Before Sunset, or you’ll miss out on critical details and background on characters that could hamper your understanding and enjoyment of book two.

“All the secrets of the world are contained in books. Read at your own risk.”
~ Lemony Snicket

What do you think? Cancel reply

...to my random musings on the ordinary, and sometimes extraordinary, adventures of a family of two.

All content and photos, unless noted otherwise, belong to me. Please do not use without permission. kthx

I am a participant in the Amazon Services LLC Associates Program, an affiliate advertising program designed to provide a means for sites to earn advertising fees by advertising and linking to Amazon.com. This means that some of the links in my posts might redirect you to Amazon and if you decide to purchase an item I linked you to, I might receive a commission.
Follow @jesswalser

FOR LADIES ONLY! Click here to learn about eco-friendly feminine products:

Want to learn more about primal or paleo living? Check out these great resources and recipe sites.

Other Fun Blogs I Enjoy